Could You Be Experiencing Early or Late Dental Implant Failure? 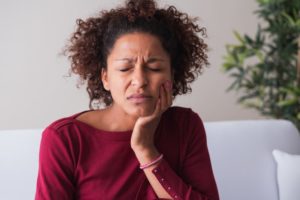 Maybe there wasn’t enough bone in your jaw. Maybe diabetes or another medical condition stopped your mouth from healing correctly. Or maybe you developed gum disease as a result of not brushing as well as you should have. There are plenty of reasons why your dental implants might fail, and such complications could occur shortly after the surgery or many years down the line. Regardless of the when or why, though, dental implant failure should always be considered a highly serious threat to your oral health; after all, if you lose your new teeth, you’ll once again have a gap in your smile that will prevent you from chewing and speaking properly. If you want to keep your dental implants in Belmont safe, keep reading to learn more about the causes and signs of failure – as well as how to avoid it!

What are the Causes of Early and Late Implant Failure?

Early implant failure occurs within three or four months of the initial surgery to place the titanium posts in your mouth. Common risk factors include an infection that develops during or after the procedure as well as insufficient bone support (meaning there’s not enough bone tissue in the jaw to fuse with the implant). Also, if you rock or move your implant, the pressure could lead to bone loss, which in turn causes the implant to become loose.

Late implant failure can happen at any time over the long term. It might be a result of nerve damage that occurred during the surgery itself, or the body may reject the implant post at some point. You’re also likely to lose an implant if the area around it is injured.

How Do You Know That You’re Suffering from Implant Failure?

One of the key symptoms of dental implant failure is excessive pain. A certain degree of discomfort after implant surgery is normal, but it could point to a major complication if it doesn’t improve after about five to seven days. Other signs of both early and late implant failure include:

What Can You Do to Prevent Implant Failure?

Dental implant failure is fortunately extremely rare, but you should still try to avoid it at all costs. To keep your new teeth safe, remember to:

If you do experience dental implant failure, you should see your periodontist in Belmont right away. Hopefully with the right treatment, you’ll be able to save your new teeth and keep your smile whole. Pay close attention to your implants, and always be ready to act quickly if you notice something is wrong!

Dr. Alexander Schrott is a trained periodontist and implant specialist. He has been certified by both the American and German Boards of Periodontology, and he’s given multiple presentations about dental implant therapy throughout the United States, Europe, and Asia. At his practice in Belmont, Schrott Perio Implants, he’s fully prepared to help patients suffering from a form of dental implant failure. To schedule an appointment, visit his website or call (617) 484-9240.

Comments Off on Could You Be Experiencing Early or Late Dental Implant Failure?